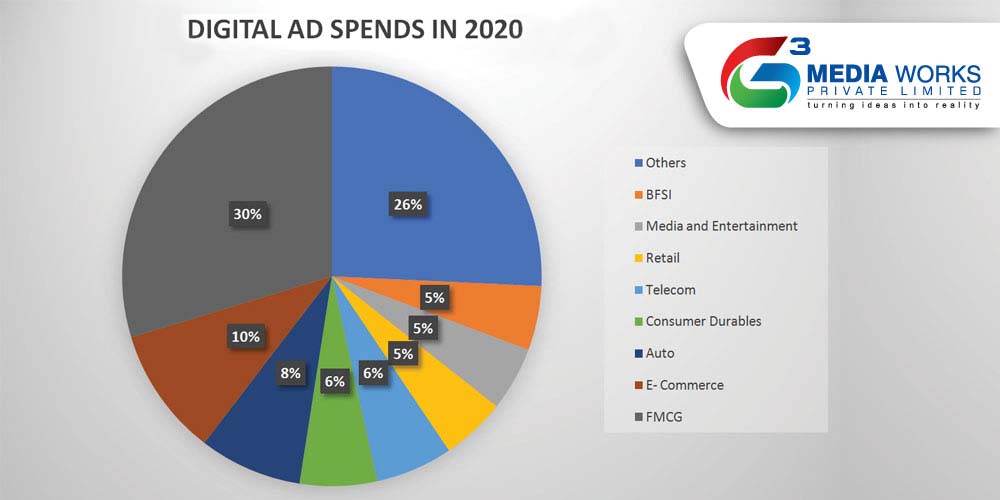 Ad Spend in India! What every investor and stakeholder need to know about the online promotion and digital industry?

Reading Outcome : Ad spend in India is an analytical as well as a statistical blog that will project trends pertaining to digital ad spends and at the same time varied advertisement trends which often plays a pivotal role in channelizing the marketing as well as advertising patterns of an organization.

Is economic slowdown something to consider about when it comes to ad spends?

Despite early indications of a worldwide financial log jam, the occurrence of economic downturn isn't slowing thedigital ad spend and its subsequent spending. This goes on to prove that no matter what the situation is, economic conditions are or the marketing conditions are, ad spendsare ascending over the globe combined with digital advertising and other forms of publicity.

This kind of situation brings in an impending question what is the ad spend situation in 2020 and how will it transform in the upcoming days. The answer to the question is, all things considered, social media promotion and digital advertisement spending rates are said to be more vulnerable in 2020when compared to 2019. Yet the current trends prove that changing advertisement marketis as opposed to the fixed plan spending pattern.

It is also to be noted that though the publicizing market is failing to meet expectations of the economy, it is not on the grounds that sponsors or investors have quit contributing towards digital advertisements. Rather, it is on the notion thatthey are distributing their resources into different regions like promoting innovation, information and online business which actually profits the promotions of digital advertisement spends.

On the other hand, though it was projected that ad spending will ascend by 17.6% to $333.25 billion in 2020 as per the recent ad spending trends, it is projected that the trend will grow further at least by 50% in the upcoming days. This goes on to prove that digital is the new era and way forward and the proof for this is the increased ad spend in India and globally!

Not alone that, there are also other associated factors which will see a new change and trend. Keeping that in mind, we have compiled some important trends and factors explaining how ad spend in India will have a phenomena factor in a detailed manner! What are the factors that every investor and stakeholder need to know about the online promotion and digital industry?

Increased ad spends: In certain nations, including UK, China, Norway and Canada, digital ad spends have become the prevailing advertisement medium. This year, countries like India, US and Netherlands will join the above trend, thereby representing a global ad increase from 52.6% to 54.2% This increase is a proof that online advertisements will go more advanced and further diversified.

Innovative promotions In the interim, in less/ developing countries like Latin America parts of Southeast Asia and India online promotion ventures will keep on improving and at the same time will find new avenues of development with the help of financial specialists in a terrific way. It is also projected that; these dimensions will give way for improved digital marketing in the upcoming days.

Google spends This goes without saying and the fact is that, Google will remain the biggest computerized advertisement dealer on the planet. Especially in India for the year 2020, Google will be representing 31.1% of overall promotion spending, or $103.73 billion to be precise. Facebook will be No. 2, with $67.37 billion in net promotion incomes, trailed by China-based online portal Alibaba, at $29.20 billion.

Amazon spends In spite of the fact that Amazon has been relentlessly working on the Google-Facebook duopoly in India, Amazon’s overall online spend will be comparatively lesser when compared to Google spends or even Facebook’s online promotion for that matter. (In India it is said to be valued at $14.03 billion in terms of promotion income as well as spending)

Customer experience This is definitely an interesting trend! Brands in India will not only separate their conventional storehouse advertising from the digital advertisement, but will start spending towards client experience. To put in other words, ads will start focusing on client experience as a matter of importance. There will be also be an all-encompassing sphere on the best ways to attract purchasers across the globe in a vivid manner.

Localized promotions This is something to consider and also to look out for. Publicists in India will begin spending more on local promotion. These localized advertisements will copy the look and feel of the media group where they show up thereby, increasing the more prominent acknowledgment and commitment towards local market (since they are intended to flawlessly incorporate into social feeds and sites versus flags or pop-ups).

What is the take way and how ad spends in India will reflect the digital marketing trend in the upcoming days of 2020?

From the above pointers it is quite evident that India is definitely on its digital pathway and will soon redefine the way we see or use digital marketing or online promotions for that matter.

The above list goes on to prove that women are more than what we think and can achieve anything and everything if they are given the right opportunity and chance. Plus, the achievements showcased by the above women are a proof of testament that Science and Innovation which was once considered as a men’s zone is now seeing a lot of women bringing in laurels and critical acclaims which is not only taking the nation to great heights, but is also improving the societal developments to a large extent.

One more interesting factor to consider is in the year 2020, India will continue to be the third-highest contributor to the incremental ad spends while China drops to the fourth spot and the eight fastest-growing country with respect to ad spends across the globe.

This is due to the very fact that India being a diverse country, digital ad spends will keep growing, especially with the rise of new-age content platforms and its availability in multiple languages powered by the growth of innovation and technology.

So, this brings us to a realization that, even though India is experiencing an economic slowdown, its overall online ad spend is are expected to be between at low to moderate growth rate combined with anticipated robust growth pattern!

Hence, it can be clearly said that 2020 is an era of possibilities and new pattern for India!