Reading Outcome : After reading this article, you will understand the trends and other questions that were raised in Part 1 of How Digital Viewership Plays A Key Role In Enhancing Visual Communication?
Reading Time: 10 Minutes

In the first part, we analyzed how digital literacy has progressed in these years and also the other reasons why Asia- Pacific zones lead in this transformation. In this segment we will be answering two questions, why other regions struggle in getting a spotlight viewership? And how will it be in the upcoming years? In a more vivid manner! 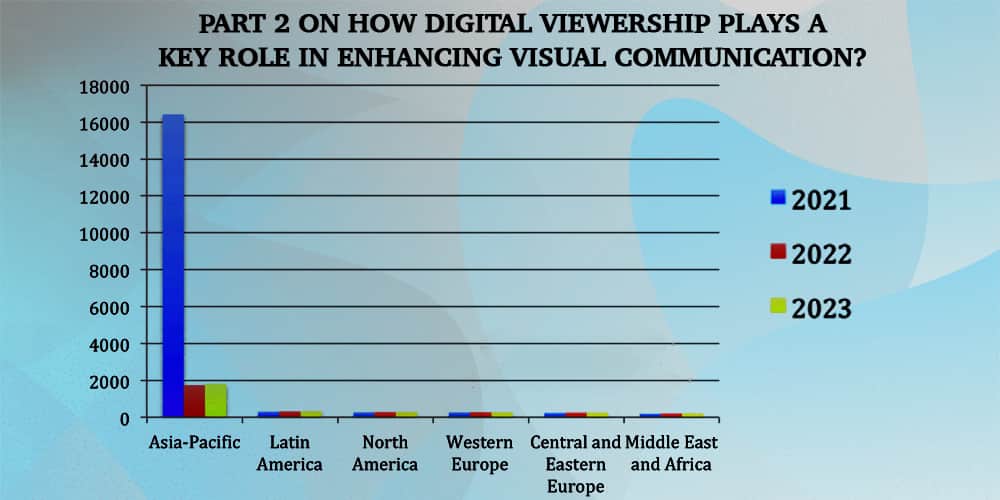 Beyond our understanding and progression there are certain factors that either contributes or pushes the Digital Literacy’ and ‘ Media Transiency ’. Let us explore that in the below lines.

A. Why Certain Zones Lack That Spotlight? The answer probably lies in geographic proposition and its subsequent zonal exposure, which we often consider it as a secondary element and this is why Latin America, North America come secondary and zones like Western Europe, Central/Eastern Europe, Middle East and Africa come tertiary in media exposure ranking.

» The switch from less content to narrative content: The answer probably lies in geographic proposition and its subsequent zonal exposure, which we often consider it as a secondary element and this is why Latin America, North America come secondary and zones like Western Europe, Central/Eastern Europe, Middle East and Africa come tertiary in media exposure ranking.

» The Mandella Effect: News on South Africa exists in three settings: before Mandela, during Mandela, and after Mandela. Until Nelson Mandela's first year as president in 1994, news inclusion of South Africa was centered onpolitically sanctioned racial segregation. News on South Africa involved roughly 60 percent of the media space on Africa. News inclusion declined during Mandela's first term, settling in at around 30 percent, where it has remained until today. The vertical lines on the plot beneath mirror Mandela's presidential term and plainly show the three periods of the "Mandela Effect.

» Patchy Media Coverage : This can be applied to Middle Eastern Countries and African Countries. Compared to other countries, Nigeria's impact is generally dubious. The 2003, 2007, 2011, and 2015 Nigerian Elections have brought about extraordinary spikes of media consideration. This is seen principally in the NYT and The Economist, significantly less so in the WSJ. In spite of having the landmass' biggest GDP, media consideration on Nigeria apparently just spotlights on decisions. The uptick in 2014 might be because of the Boko Haram capturing, an end upheld by the expansion in articles with features like "Stories of Escaped Girls Add to Worries in Nigeria" and "New Abductions Distress Nigeria; U.S. Offers Help."

» The Super Power Country’s Influence : The United States overshadows every single other nation in both crude and relative media terms, particularly in the post-Mandela period. Indeed, even China's ascent scarcely enlists in their records. This eventually sidelines the media coverage. In addition to that, the impact of France and the United Kingdom in Africa is additionally clear. Contrasted with Germany, France and the U.K. reliably appreciate more news makes reference to, showing that there association with the mainland has preceded past the frontier period.

All these analysis eventually reminds us about US President Donald Trump’s alleged remarks questioning why the US should take in immigrants from what he apparently called “shithole countries” — those comprising Africa, along with Haiti and El Salvador. It also remind us that individuals from Africa and other countries are same as individuals from any landmass and simply in general dedicate their energies to the quest for a superior life for themselves and their families. The way that it appears at all important to need to try explaining the decent variety of the mainland and the fundamental idea of human presence says a lot about how much the whole landmass of Africa and its billion occupants appear to be very regularly decreased to a solitary rough generalization or, for this situation, into a solitary critical descriptive word.

In any case, taking into account how "Africa and other latent continents" is depicted in the news media — the prime (if not just) wellspring of data for a great part of the outside world about the landmass — it should maybe come as meager astonishment that these nations tends to be seen in such a cliché way.

B. How will it be in the upcoming years? Keeping in view of the points mentioned above and in line with the point mentioned in part 1, we can clearly state that, media exposure will be touted in the below mentioned ways which includes factors like,

» Practically 50% of distributers (44%) state they are progressively stressed over the power and impact of stages than this time a year ago. Just 7% are less stressed. Distributers feel more adversely towards Facebook and Snapchat than they do about Twitter and Google

» Regardless of this, distributers likewise censure themselves for their continuous challenges. The greatest obstructions to progress, they state, are not tech stages but rather interior variables (36%, for example, protection from change and powerlessness to improve.

» Practically 50% of distributers (44%) consider memberships to be a significant wellspring of advanced income in 2018 – more than computerized show publicizing (38%) and marked and supported substance (39%).

» Anticipate more sound in 2018: 58% of distributers state they'll be concentrating on web recordings, with a similar extent taking a gander at substance for voice actuated speakers.

» Examinations concerning deception and the job of stages increase, yet lead to minimal solid activity in many nations past new guidelines for political decision based publicizing.

» Facebook or Google will be normally blamed for oversight this year after defensively expelling substance, which they feel may leave them open to fines.

» Distributer’s power clients to sign-in/register for sites and applications – just as putting intensely in information – to help convey increasingly customized substance and informing.

» For the conventional media, we'll see a developing hole between enormous brands effectively overseeing computerized progress and the rest (that are battling).

In short Internet based life, will move from informing stages to conversational interfaces.

On A Final Note:
In light of a legitimate concern for parity, it merits bringing up that two of the greatest accounts of the year were driven in a positive manner by Internet based life. In October the hashtag #MeToo turned into a mobilizing cry against rape and badgering after a tweet by on-screen character Alyssa Milano, one of Harvey Weinstein's most vocal pundits. Inside 24 hours, 4.7 million individuals around the globe occupied with the discussion, as per Facebook, with over 12m posts, remarks, and responses. The development has additionally roused branch hashtags utilized by men, including #IDidThat and #HowIWillChange, in which men have conceded unseemly conduct.

Soon, this trend will go up and bring in a new surge of media exposure! So look out for media changes that can impact you in every possible way!